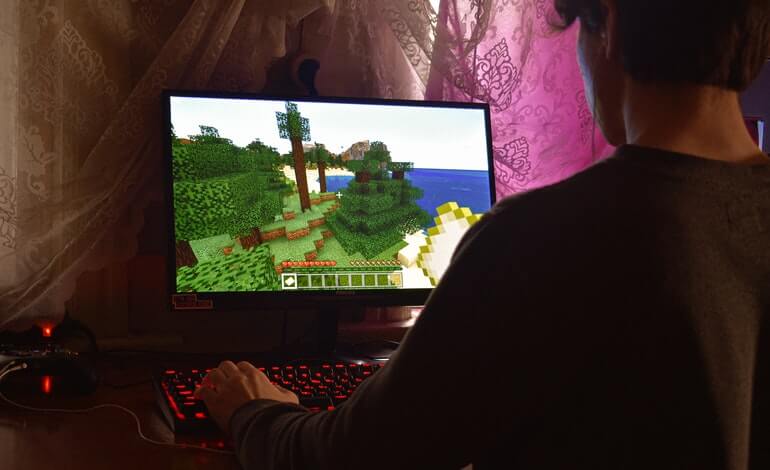 A new generation of video games is emerging. These games are always online, social, and set in fantastical worlds. Furthermore, they allow gamers to earn real money while playing. They can become landlords, create customized items to sell to other players, and own the items they collect.

These games have introduced blockchain to the video games industry, adding a new layer of technology that opens up numerous possibilities, especially in multiplayer games. We’ve explored how it all works, what kinds of features the industry is adding to this new generation of games that have blockchain at their core, and which ones you can play right now.

What Blockchain Brings to Video Games

Bitcoin and, along with it, the revolutionary blockchain technology isn’t such a new thing anymore. Launched more than a decade ago, it was a revolutionary way to send money online and shop anonymously. Soon afterward, we saw the implementation of blockchain in the gaming industry. But while Bitcoin-based casinos were cropping up from all corners of the internet, traditional video games were significantly lagging behind.

In 2017, a new, rather humble video game called CryptoKitties was launched. It allowed players to stake their crypto coins, purchasing virtual cats they could then collect, trade, and “breed” to get even more cats. The game was elementary in terms of game mechanics yet vitally important, as the game studio behind it would soon find out. Thanks to those virtual kitties, the doors finally opened for blockchain in the games industry. More studios, big and small, started exploring ways to incorporate blockchain and cryptocurrencies into their games, especially once a massive metaverse became an attainable reality.

But what does this technology bring to the table that wasn’t already possible?

One of the main advantages is control. Gamers love collecting shiny trinkets in online games, but they’ve never felt like they actually owned those items. A game developer may decide to alter or outright remove an item, leaving players empty-handed. Blockchain technology in gaming has also improved security, as data written to blockchain can’t be removed or altered. Finally, there’s also the matter of player-run services and economy. Since you own the items, you’re free to do as you please – borrow, rent, or even sell them to other players.

Developers don’t need to develop their own blockchains. Instead, they can work on implementing the existing ones. The cryptocurrency Ethereum is the most popular choice due to its high versatility, and most games we’ll be looking at today use this blockchain. Since blockchains are open-source and written in basic coding language, game developers don’t need to put in a lot of effort to make them work in video games.

As a constantly evolving medium, video games have only recently started to implement blockchain technology. Despite this, studios and publishers have already found several ways to enhance the gaming experience by using blockchain, cryptocurrencies, and NFTs in their games.

It started small, with barely known studios experimenting with this tech, but it’s progressing rapidly, and nowadays, everyone seems to be looking into making a crypto MMO. The pursuit for the metaverse is the main driving force for crypto and blockchain implementation. Big-name companies like Ubisoft and Konami have recently unveiled their first crypto gaming projects, followed by Microsoft and Electronic Arts.

So, let’s look at some of the ways blockchain has found its way into modern video games.

The most obvious use of blockchain has to do with its inherent connection with cryptocurrencies. Game developers open up new ways for their players to quickly purchase in-game items without using credit cards. Many people already had some crypto and wanted to spend it while playing, so it was natural for support for Bitcoin and Ethereum to be implemented ASAP.

One thing all games on blockchain have in common is that they use your crypto wallet as a means of user authentication. This way, instead of just typing in your username and password, you log in with your wallet and confirm your identity. Wallets like Metamask have become hugely popular thanks to this. Metamask and similar wallets aren’t limited to a single platform, so if the game runs on the same blockchain, you can use it for all your purchase and authentication needs.

Gamers love all kinds of vanity items and collectibles. Why travel across Azeroth in World of Warcraft on foot if you can ride in style on your Spectral Tiger? The use of blockchain in video games doesn’t change what you can collect or craft, but in addition to that, it offers digital items you can purchase and sell for actual money. In the case of the aforementioned WoW mount, estimated to be worth around $500, you can’t directly sell it to another player or even an in-game shop and cash out. Instead, you’d need to rely on a third-party payment method and trust that your buyer meets their end of the bargain.

Games that rely on blockchain solve this by giving full ownership of digital items to players. Each item is a nonfungible token, meaning that each is unique and registered to a particular player. Blockchain technology in video games even goes a step further, allowing players to have their say in the game’s future development based on which items they currently own. Governance and a player-run economy are what really separate these new multiplayer games from traditional MMOs.

Another way players can get items in these games is by playing. As the digital collectibles and in-game cash can be converted into currency and cashed out, players can even grow their wallets by playing. However, note that these crypto games usually require an upfront purchase of various items to get you started.

These games also offer several ways to earn passive income while you’re not even logged in the game. Since all of these games are multiplayer-oriented, with shared worlds where all players meet, developers often offer digital land tenure: Players can become landlords by purchasing plots around the game world and then lend or rent them to other players. For example, a player may build a gold farming zone and take a percentage of the profits another player gains while farming there.

Most projects revolving around cryptocurrencies, blockchain technology, and metaverse are still in their infancy. But, in recent years, a few games have emerged that were either built on blockchain or include some kind of implementation of this technology. Here are the most notable ones.

Similar to Pokemon, Axie Infinity is a game of collecting creatures known as “Axies” and pitting them against each other in battle to score some crypto. Everything you collect is NFT-based and tradable, but to start, you need to purchase at least three Axies.

One of the most recent video games on blockchain, Blankos Block Party is what happens when those bobble-headed minifigures come to life. Players are incentivized to purchase and trade NFTs representing these colorful characters and customization items and create worlds and activities for other players to enjoy.

Launched in 2017, CryptoKitties was the first big game that used NFTs. In it, players collect, trade, and breed virtual cats, trying to raise unique kitties. Even though it’s one of the oldest games of this kind, it still doesn’t have any end goal or mechanics beyond the ones we’ve just described.

The year 2022 will be interesting for blockchain in the video games industry, thanks to games like Age of Rust. This is a sci-fi action game where players get to explore the whole galaxy and unravel an intriguing story. Here, you don’t have to purchase anything to play, but certain special missions do require tokens to unlock. You can also buy NFTs that represent various items required to solve puzzles – or earn them by playing and then sell them to other players.

Ubisoft’s massive Ghost Recon franchise is one of the first AAA blockchain video games through the Ubisoft Quartz program. The publisher sells items called Digits, each representing a piece of cosmetic gear for the operatives in the game. Players can also claim these for free if they play the game enough and items are numbered, so everyone’s on the hunt for specific numbers.

What started as a visualization of a liquidity pool and mining is now a kingdom-building game. This is a calm game with cute pixel art akin to old school RPGs. Every location in the game is actually tied to various cryptocurrency protocols and exchanges, gamifying them along the way.

This fantasy game on blockchain has players exploring mysterious worlds and fighting monsters together. It’s an MMORPG with cutesy graphics and top-down view on the action. Players can become landlords and trade rare collectibles when they’re not adventuring.

Blockchain is slowly, but steadily, becoming a significant element of the gaming industry and gaming culture. While the majority of gamers aren’t showing much interest right now – mostly due to fears of egregious monetization – hundreds of thousands have embraced the new trend. Virtual worlds are constantly popping up and, with metaverse looming on the horizon, video games are bound to become even more engaging and compelling in the upcoming years.

Q.What is the point of blockchain gaming?

It’s a concept where in-game items like skins, weapons, and mounts are treated like assets. Players can freely trade and sell their virtual possessions, cashing out when they no longer wish to play the game. These games also put an emphasis on creativity and player-choice on governance, housing, and activities. All data about ownership is stored on the blockchain.

Q.Is Roblox on a blockchain?

Not right now, at least not entirely. While the main game itself doesn’t use blockchain, a recent project called PlayDapp does, incorporating Roblox characters alongside its own tokenized assets.

Q.Is blockchain the future of gaming?

Gaming is an ever-growing industry, earning more every year. In fact, it’s already earning more than the film and music industry combined. According to some estimations, there are 3.24 billion people who play video games in the world. So there’s no doubt we’ll see even more projects that involve blockchain in the video games industry, especially if this first wave of games proves profitable and popular enough.