How Do Bitcoin Transactions Work?

Cryptocurrencies are all the rave: There’s such an abundance of them on the market at the moment, but the biggest and a pioneer in the field is undoubtedly Bitcoin. It’s also the most valuable cryptocurrency, growing exponentially beyond anyone’s wildest imaginations.

Since Bitcoin and other cryptocurrencies are gradually becoming acceptable means of payment, there’s a need to get acquainted with them. This brings about the question: How do Bitcoin transactions work?

While we wait for the world to turn into a place where, as crypto enthusiasts describe it, “everyone could buy a Starbucks with Bitcoin”, let’s discuss some of the basic terms and concepts.

Bitcoin is a blockchain-based digital currency introduced by Satoshi Nakamoto in 2008. Think of it like digital money, with cryptocurrency transactions performing all the regular functions of paper money. However, you never get to see a bitcoin or hold it in your hand: There are no physical representations for the cryptocurrency.

The “crypto” part refers to encryption that all digital currencies running on blockchains have. With Bitcoin, a transaction is literally an exchange of digital values between two parties.

Satoshi created Bitcoin as a peer-to-peer electronic cash system. But instead of a banking environment, you have the blockchain.

The blockchain is a sort of shared public ledger which records every transaction. With the blockchain, Bitcoin wallets (which work like regular wallets) can calculate the balances before and after confirmed transactions have been recorded.

We’ve established that transactions are an exchange of value between Bitcoin wallets. Now let’s touch on the verification of these transactions.

Mining is also the process by which new Bitcoin units are released into the network. Individuals called BTC miners contribute computing power to the mathematical process running the Bitcoin network and get rewarded with new units of Bitcoin.

A new block – discovered by miners through the mining process – is added to the blockchain approximately every ten minutes. This new block records and verifies any transactions performed within its time frame. Then we can say the network has confirmed a transaction.

How Many Confirmations Are Enough?

BTC transactions require multiple confirmations because they run the risk of being reversed. The more confirmations there are, the less likely it is for a reversal to happen.

How To Do a Bitcoin Transaction

Now that we’ve covered the basics let’s see how you can carry out a transaction. It’s quite similar to conducting transactions using regular currency. The first thing you need is a Bitcoin wallet. The wallet works in the same manner as your bank account or eWallet.

Of course, you’ll also need spendable Bitcoin in the wallet. The easiest way to get it is to buy Bitcoin for the equivalent of government-issued currency. Suppose you have $600 in regular money; buying Bitcoin would give you $600 worth of Bitcoin in your wallet, which you can then send to other wallets.

To send Bitcoin to another user either as a deposit or a payment for an item, you need three things: your Bitcoin wallet, the Bitcoin you seek to transfer, and the recipient’s wallet address. A wallet address is like an email address, and represents the identity of an individual’s wallet. Of course, you’ll also need an internet-connected device.

Next, you open the wallet app and select Send: 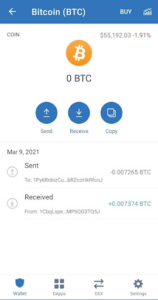 The next step is to copy and paste the recipient’s wallet address or scan the QR code. 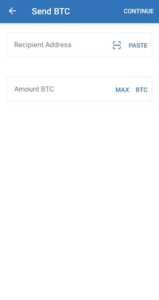 Enter how much you want to send: 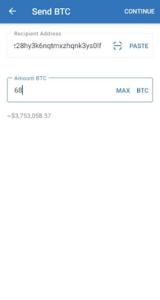 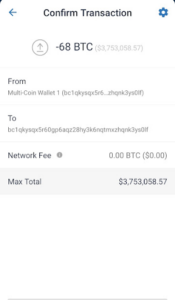 Proceed with your transaction.

How To Receive BTC

Receiving Bitcoin is even easier than sending because, in this case, the transaction is coming from another end; your wallet is just the final destination.

It takes just a few steps to receive Bitcoin.

Choose which wallet you want to receive Bitcoin to. Make sure to select BCH for Bitcoin Cash and BTC for Bitcoin.

Copy your wallet’s BTC address and send it to the sender, or let them scan your QR code.

Voila! Wait for the transaction status to change from Pending to Successful.

Most times, you do not even have to calculate it yourself, as most wallets account for the fees in every transaction, which is why you can only transfer slightly less than your total wallet balance. The remainder is the miner’s fee. You can check your wallet’s transfer fees in its manual.

How To Check a BTC Transaction

You can easily look up a cryptocurrency transaction and details about it online as you would any other transaction type. All you need to do is visit a block explorer, such as blockchain.com/explorer, and use the search bar on the upper right. You can learn more about a particular Bitcoin address, transaction hash, or block number by entering the necessary info into the search field. With the transaction ID, you can see how many times your transaction has been confirmed, as well as other details.

As you can see, there is nothing complicated about how a Bitcoin transaction works. Apart from being very straightforward, the process is also completely safe. All you need to start sending and receiving BTC is an eWallet and some Bitcoin.

Q.Can Bitcoin be converted to cash?

Yes, you can convert Bitcoin into any currency in the world. There are various channels for Bitcoin conversion such as selling Bitcoin on a crypto exchange, bank or Paypal transfers, Bitcoin ATMs (there were nearly 15,000 Bitcoin ATMs all over the world as of January 2021), Bitcoin debit cards (which function like regular debit cards), or peer-to-peer transactions.

Contrary to popular belief, these transactions are traceable, unlike cash. While it may be difficult to figure out the parties in a transaction, it is possible to study the cryptocurrency’s patterns and movement to profile and identify suspects.

Q.How long does it take to get your money from Bitcoin?

Most wallets require at least two confirmations to reflect fully in the balance. This can take anywhere from five minutes to an hour, but if everything is running well, the Bitcoin transaction process is relatively swift.